Abundance-age ratios in the HARPS-GTO sample with Gaia DR2: Chemical clocks for a range of [Fe/H] (accepted in A&A)

Stellar evolution is dominated by the thermonuclear reactions taking place in its interior. In general, these reactions consist in the fusion of lighter elements (H, He, etc.) producing heavier elements and energy. This is how the star obtains its energy and this is also how almost all the elements heavier than H and He of the universe are produced.

How fast a star evolves and which elements are produced during its life depends on its mass. The heaviest the star, the faster its evolution, and, thanks to the internal physical conditions, the chemical elements produced are also different. In particular, massive stars evolves very fast, they explode in a few million years, producing the so-called [Símbolo]-elements, among others, such as O, Al, Ti, Mg, Si, Zn, … The consequence of this is that the Galaxy was polluted from its very early stages with these elements. On the other hand, low-mass stars evolve very slowly, of the order of units of thousand million years or more, and they produce the so-called s-process elements, among others, such as Sr or Y. That is, these elements have polluted the galaxy little by little.

If we assume that, when a star is born, it is made with the elements present at that time, all the Galaxy is in general chemically homogeneous, and the current abundances at its surface reflects the abundances at birth for most of the elements, then we potentially may construct a clock for dating stars, a Chemical clock. Measuring the relation between an [Símbolo]-elements and an s-elements at the surface of a star, we are in fact measuring its age since this ratio changes with time.

In this paper, with the help of one of the best data sample available for this work (hundreds of stars with very precise observations of their surface abundances for more than 20 elements thanks to HARPS-GTO and Gaia DR2), we have analysed all the possible chemical clocks, providing a list of ten reliable ratios. We have also analysed the impact on the stellar dating of additional stellar characteristics, such as its effective temperature, metallicity, etc. With all this, we have revised the two proposed linear relations in the literature for stellar dating using Chemical clocks and added tens of them to the list, up to dimension 3. 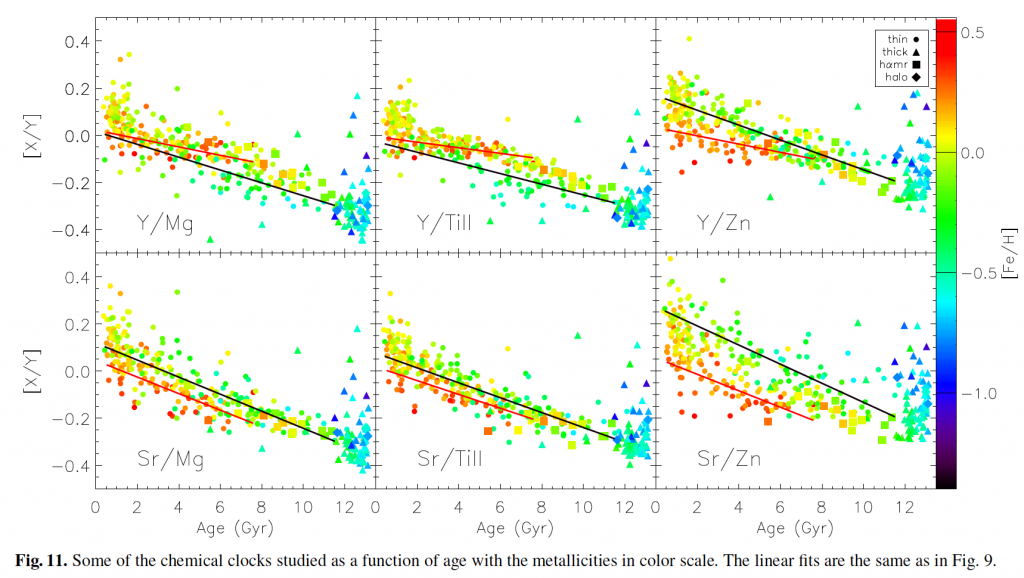